Ride-hailing platforms Ola and Uber on Monday announced resuming operations in more cities, including Delhi and Bengaluru, following new guidelines for the fourth phase of the lockdown. Ola said it has resumed normal ride operations in more than 160 cities with enhanced safety protocols applicable with every trip as per the state governments guidelines.

The company said that driver-partners operating three and four-wheelers on the platform will be available to serve mobility needs on Ola app, with highest levels of safety precautions in Covid-19 sensitive states like Karnataka, Telangana, Delhi, Haryana, Chandigarh, Punjab, Tamil Nadu (except Chennai), Andhra Pradesh, Kerala, and Assam.

The safety protocols include “compulsory mask usage for driver-partners and passengers, complete sanitization of cars post-trips, adhering to social distancing norms by limiting to two passengers per ride amongst other key steps through our ’10 Steps to a Safer Ride’ initiative,” a company spokesperson said in a statement.

Cab services were suspended for more than 50 days in Delhi and Bengaluru due to restrictions imposed by the government to contain the spread of coronavirus.

“In compliance with Lockdown 4. 0 guidelines by the Government, Uber is resuming services across more cities in India. Riders will constantly be notified with further information and the status of specific cities through our app,” it said in a blogpost. 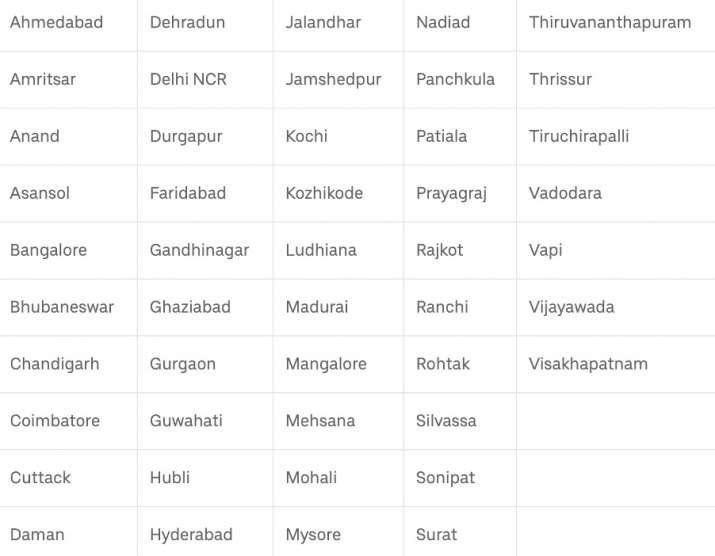 Ola vehicles will not operate to and from government identified red or containment zones.

“All driver-partners are required to wear masks and need to authenticate this before the start of every ride by sharing a selfie through their partner app,” said Ola.

With the 10 new cities, Uber will be available in total of 35 cities in the country. The company had earlier resumed operations in 25 cities.

Ola said driver-partners operating three and four-wheelers on the platform will be available in the states of Karnataka, Telangana, Delhi, Haryana, Chandigarh, Punjab, Tamil Nadu (except Chennai), Andhra Pradesh, Kerala, and Assam.

“This also brings relief to millions of drivers-partners whose livelihoods depend on serving citizens on a daily basis. In all of the over 160 cities where Ola is now operational, enhanced safety protocols are applicable across every single trip,” Ola said in response to an emailed query.

According to industry executives, services for travelling between locations in two states (for example, Delhi and Gurugram) will still not be available under the current rules.

Ola and Uber outlined steps for ensuring the safety of riders and driver-partners. Ola said its safety protocol includes compulsory mask usage for driver-partners and passengers, complete sanitisation of cars post-trips, and adhering to social distancing norms by limiting to two passengers per ride.

Earlier on Monday, Uber announced that both driver and rider will mandatorily have to use face masks during a ride. Also, drivers will have to upload a selfie wearing a face mask before going online on the platform. These companies will also allow drivers and riders to cancel trips if they do not feel safe, including if a user is not wearing a mask or face cover.

Uber and Ola had suspended operations after the government announced a nationwide lockdown from March 25 to contain the spread of COVID-19 infection. They allowed only people in essential services like healthcare, banking and media to commute and the restricted mobility left driver-partners of cab services like Ola and Uber with no source of income.

After 40 days of lockdown, some relaxations were provided in the third phase (May 4 onwards), including allowing cab services to operate in orange and green zones.

Uber started operations in 25 cities, including Jamshedpur, Kochi, Cuttack and Guwahati (green zone) as well as locations like Amritsar, Rohtak, Gurugram and Visakhapatnam (orange zone). Ola had said its services were available in more than 100 cities. The demand and supply had been low in the first few days after these platforms had resumed services.

According to industry executives, demand was low in various cities as people were stepping out only for essential travel, while the number of vehicles on the road was also limited as a fraction of drivers logged onto work.

(With inputs from agencies)