The Indian Air Force (IAF) is the air arm of the Indian Armed Forces. Its complement of personnel and aircraft assets ranks fourth amongst the air forces of the world. Its primary mission is to secure Indian airspace and to conduct aerial warfare during armed conflict. The IAF was officially established on October 8, 1932, as an auxiliary air force of the British Empire which honoured India’s aviation service during World War II with the prefix Royal. Once India gained independence from the United Kingdom in 1947, the name Royal Indian Air Force was kept and served in the name of Dominion of India. With the government’s transition to a Republic in 1950, the prefix Royal was removed.

History of the IAF

The Indian Air Force was established on 8 October 1932 in British India as an auxiliary air force of the Royal Air Force. The enactment of the Indian Air Force Act 1932 stipulated out their auxiliary status and enforced the adoption of the Royal Air Force uniforms, badges, brevets and insignia. On 1 April 1933, the IAF commissioned its first squadron, No.1 Squadron, with four Westland Wapiti biplanes and five Indian pilots. The Indian pilots were led by British RAF Commanding officer Flight Lieutenant (later Air Vice Marshal) Cecil Bouchier.

During World War II, the IAF played an instrumental role in halting the advance of the Japanese army in Burma, where the first IAF air strike was executed. The target for this first mission was the Japanese military base in Arakan, after which IAF strike missions continued against the Japanese airbases at Mae Hong Son, Chiang Mai and Chiang Rai in northern Thailand. 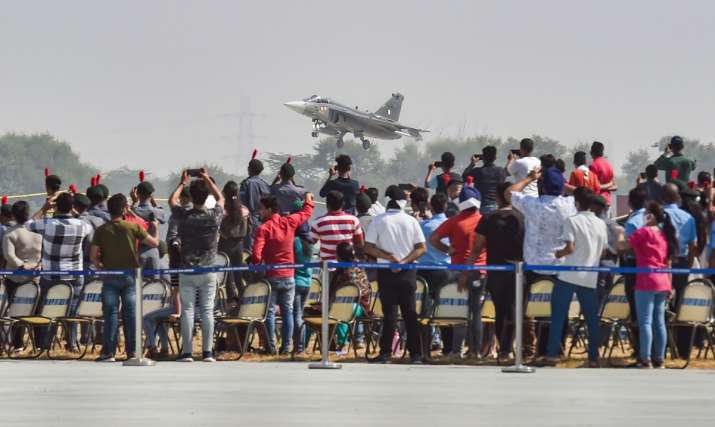 Mission of the IAF

The IAF’s mission is defined by the Armed Forces Act of 1947, the Constitution of India, and the Air Force Act of 1950. It decrees that in the aerial battlespace, defence of India and every part there of including preparation for defence and all such acts as may be conducive in times of war to its prosecution and after its termination to effective demobilisation.

The IAF provides close air support to the Indian Army troops on the battlefield as well as strategic and tactical airlift capabilities. The Integrated Space Cell is operated by the Indian Armed Forces, the civilian Department of Space, and the Indian Space Research Organisation.

“The ongoing process of modernisation with the induction of Rafale, Apache and Chinook will transform the IAF into an even more formidable strategic force. Confident that in the years to come, the Indian Air Force will continue to maintain its high standards of commitment and competence,” he said in another tweet.

The ongoing process of modernisation with induction of Rafale, Apache and Chinook will transform the IAF into an even more formidable strategic force. Confident that in the years to come, the Indian Air Force will continue to maintain its high standards of commitment & competence

“Many congratulations to all the brave warriors of the Indian Air Force on Air Force Day. You not only keep the skies of the country safe but also play a leading role in the service of humanity in times of disaster. Your courage, valour and dedication to protect Maa Bharti inspire everyone,” PM Modi tweeted (roughly translated from Hindi).

“My felicitations and best wishes to the air warriors and their families on the occasion of Air Force Day-2020. Eighty-eight years of dedication, sacrifice and excellence mark the journey of the IAF which is today a lethal and formidable force to reckon with,” Singh tweeted.

The Nation is proud of its men and women in blue and salutes the prowess of the IAF as it stands ready to face challenges and deter adversaries. We remain committed to the enhancement of IAF’s combat capability through modernisation and indigenisation, he added.

Union Home Minister Amit Shah also extended his greetings to the Air Force on the occasion, and reiterated the Centre’s commitment towards the IAF.

“Greetings on Indian Air Force day! From safeguarding our skies to assisting in all odds, our brave Air Force personnel have served the nation with utmost courage and determination. Modi govt is doing everything possible to keep our mighty air warriors roaring loud in the skies,” Shah said in a tweet.

The IAF was established on October 8, 1932, in undivided India which was under colonial rule. It was given the prefix “Royal” by King George VI for its contribution during the Second World War. The prefix was later dropped in 1950 when India became a republic.

Noida: Section 144 imposed ahead of UP CM Yogi Adityanath’s visit