Entering the world of classic and vintage two-wheelers can be extremely rewarding; that is, if you play it smart. Previously, we guided you through the steps in purchasing a regular bike and followed that up with a buyer’s guide dedicated to used big-bikes. This one is the last in the series and it is quite different, because this time we’re going to talk all about the emotion-driven decision of buying a grey-haired machine of yesteryear. Here are things you must know before you reach for your wallet.

Before you even think of beginning the hunt, make sure that you are ready for what will be an adventure with plenty of highs and lows. Being a classic two-wheeler owner myself, I can assure you that owning these machines requires commitment and there’s a high probability of even a fully and meticulously restored machine failing on you. This is just the way of the game and you shouldn’t be discouraged by this fact because there is a silver lining. Each little problem you face is a learning experience as there’s no 24hr customer care number for these machines. Watching your mechanic deal with the problem a couple of times will be enough for you to attempt it on your own. These early machines are quite simple and a great way for you to learn the workings of a motorcycle, hands on.

The Yamaha RD350 here is running a front disc-brake setup from the US-spec model. Appropriate modifications like these can add value at times.

Speaking of little flaws, it’s best to get to know of the common ones before you make a purchase. Two-wheelers of the past had a much longer lifespan and even the interval between updates were quite lengthy, in most cases. This makes it quite easy to find out the common problem areas.

It’s quite surprising, but every single motorcycle model sold in India before the 1990s has an owners group or fan base of sorts. Use social media or online forums to get in touch with owners to find out what exactly one must look out for in a model, and what price you should be paying for it. If you still can’t find information, a good tip is to search the model as a hashtag on Instagram or Twitter. In most cases, people with public profiles will be more than willing to help.

Along with the common problem areas, you must also find out what original parts to look out for on the motorcycle. Given the age, many components of these machines are replaced with aftermarket or remanufactured ones. While that’s okay when it comes to consumables like an air filter or the tyres, the rest ideally should be original. Hack jobs are fairly frequent in this space. I once saw a Lambretta Li150 running on a rickshaw carburettor instead of the original Italian Dell’Orto unit and that’s something you really don’t want. That said, don’t let a component put off your purchase decision if the rest of the bike looks good, especially if the part in question is available with reasonable ease. However, there are rare instances where you won’t find certain original components anywhere. For instance, my 1962 Yamaha MF2 is missing its original leg shield and I still can’t find one despite scouring the internet for nearly two years now. 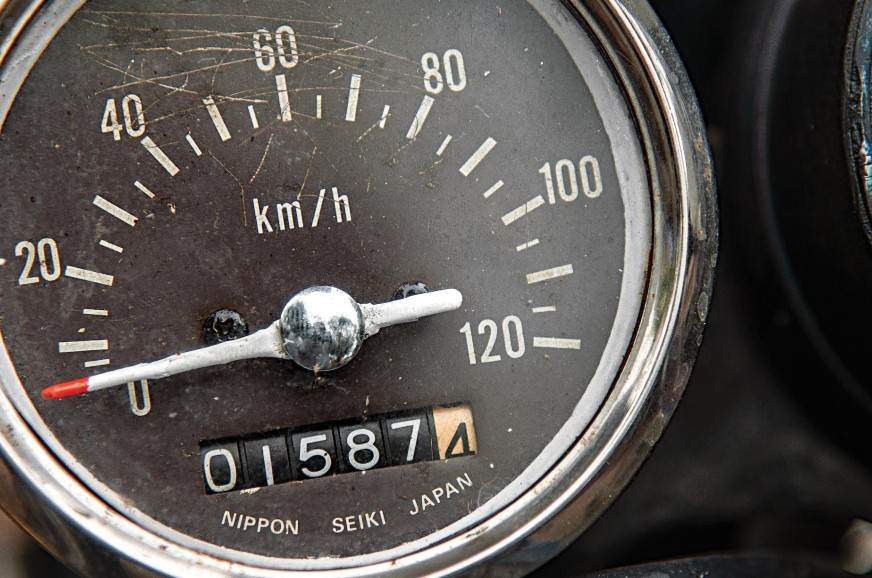 Watch out for ‘jugaad’ fixes like this case, where the needle is not from the original bike.

Another aspect worth finding out is whether there is a more desirable version of the model you are looking for. The Triumph Tiger T110, for example, got an aluminium head called the ‘Delta Head’ in 1956 and this update meant the engine ran cooler than the previous versions with the cast iron head. In the case of bikes that were officially sold in India, the early Jawa 353 models came with the unique ignition switch on the tank, while the Yamaha RX100 from the first year of production (1986) used a majority of Japanese parts. These versions will always remain more desirable, fetch a higher resale value and give you something to brag about at your group ride.

The first thing you should check is if the engine and frame number match the ones on the registration document, thus ensuring its originality. Often, you’ll find two-wheelers that aren’t transferred on the seller’s name and that he/she has been using on the previous owner’s name with transfer papers signed. This might be an issue if the seller doesn’t have the registered owner’s PAN card which has now become mandatory for the transfer process. 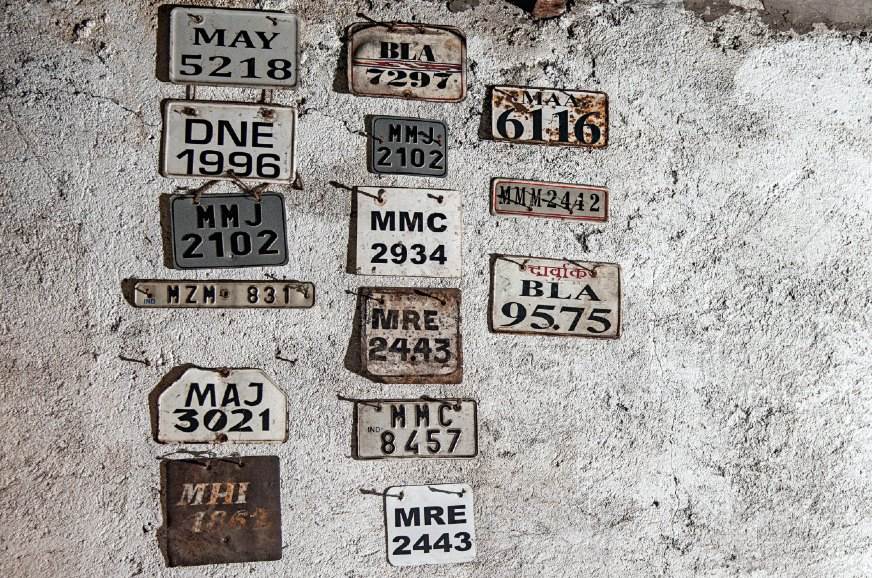 Re-registered classics lose their 3 alphabet registration numbers, and with it, a bit of their originality.

A really positive sign is if the two-wheeler has a valid green tax because that means the bike will have had all of its other paperwork checked and approved by the RTO. However, you must still make sure to double- and triple-check all the papers, including the fitness certificate, insurance and PUC. If the green tax hasn’t ever been paid, expect to pay a decent sum because the RTO will charge a penalty. To keep it up to date, you’ll have to spend around Rs 2,000 every five years for the green tax, in addition to all the other regular costs you would pay on a modern bike.

Something else to keep in mind is that the government is planning to introduce a special registration number for ‘historic vehicles’ that are older than a particular year. What this will do is help keep these machines on the road if the government introduces a ban on older vehicles, like they’ve done in Delhi. Speaking of Delhi, there’s still no hope for classic bikes registered there. You can only ride one if you’re either on your way to a workshop for maintenance or to a classic vehicle rally. While that may sound like a loophole, it isn’t worth taking the risk because there have been many instances where the police have seized vehicles for good.

What if the two-wheeler you’re interested in acquiring has no paperwork at all? While it’s best to avoid getting into this hassle, there is a way around it. If the seller has proof of ownership, you’ll have to approach the RTO it was registered at and get a copy of the original registration. Once the seller acquires the replacement registration, the rest of the transfer process remains the same.

As I have highlighted, getting into the classic and vintage two-wheeler scene requires more than just a conventional transaction. It needs knowledge and foresight backed by a generous helping of devotion. What you’ll get in return is a charming experience that is the closest thing to time travel. 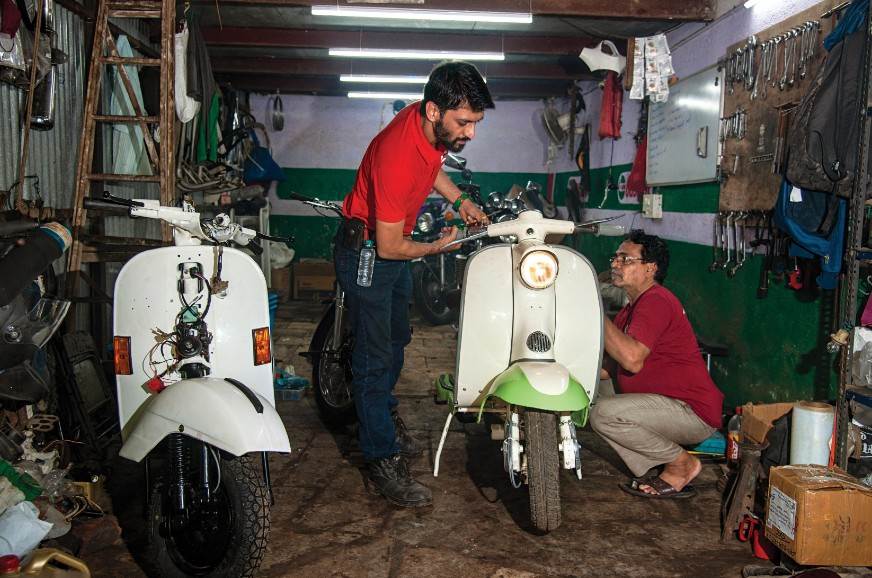 If you can get a mechanic with the necessary knowledge to examine it before the purchase, there’s nothing like it.

Mumbai-based restorer Yogi Chhabria says that the first thing he tells people is to buy two-wheelers that are already running. Non-runners can come with a lot of surprises. However, in the case of runners, even if the two-wheeler has a piston sound or a bearing sound, at least you know what you’re getting into and work towards getting it addressed. A barn find can be a gamble.